Where Are Needle Valves Used?

Which Material Is Used For Making Valves?

What Is A Floating Ball Valve?

A floating ball valve is defined as a valve type that has a floating ball design where the ball moves towards the downstream seat and that too under pressure to effect a tight seal. These kinds of valves have antistatic features along with a CPR (Cavity Pressure Relief) mechanism. Let us understand more of the floating ball valve in this blog.

The Working Of The Valve

A floating ball valve pressures the hollow ball between 2 or more cupped seats that will form a tight seal between the body and the ball present at the inlet as well as outlet ports of the body. During its processing, the ball is shifted 90 degrees with the help of a shaft and that makes it outside of the valve body. It is then linked to some type of operator. Due to this, these ball valves are called quarter-turn ball valves. However, the shaft is not tightly connected to the ball because it is required for the ball to pivot at the shaft end. It is because the shaft rotates at the axis of the ball.

This all could be accomplished with the slot placed on the top of the ball which will be perpendicular to the flow route of the ball. Usually, the cupped area of the seats cradles the ball while preventing it from shifting down in the valve body. 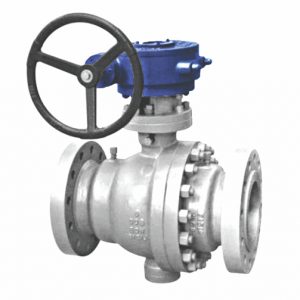 The floating ball valve packing helps to prevent the media from going out of the body of the valve. However, this could be possible with the stem opening in the bonnet. The most commonly used packing is V-type ring packing. Whenever you will look at the cross-section of the ball valve then you will see a V-shaped packing style over there. In this, the outside and inside diameter of the valve will be the same. However, the outer diameter of the packages will be the same as that of the outer bonnet while the inside diameter will match the outer diameter of the stem.

During the packing, several rings are placed on each other, and then the stem is inserted through the packing system. A packing gland on the head position of the bonnet gets pushed down on the top of V shape and owing to this the packing seals and expands against the bonnet and the stem.

The Process Of Floating Ball Valve

Whenever the ball is in a closed position, the flow in the ball is perpendicular to the fast flow path in the body. However, the solid paths of the ball cover both down and upstreams of cupped seat openings. However, the pressure in the upstream pipe gets pressurized in the forward direction against the solid ball part. Usually, this part moves on its pivot point and makes it tight against the downstream seat while closing the flow.

As the operator is rotating the ball from the closed position then body ports that are connected with the ball ports will start generating a variable size orifice. Now, this will increase the flow of the fluid/liquid via the pipe.

Floating ball valves have been the most widely used valves due to their cost-effective approach.

What Are the Main Characteristics of a jacketed ball valve?